It’s an exciting day for baseball fanatics in Grand Forks. A conference to announce this year’s competing teams was held this morning at Joga’s Espresso Cafe, who re-opened just last Thursday after last year’s flood.

“I would say every team that’s coming this year with the exception of Cuba is aware of the issues that we’ve had here in Grand Forks, we have had tremendous support from those clubs, in fact I would say San Diego is coming this year because of what’s happened last year….” 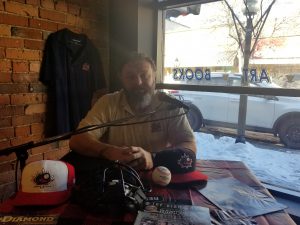 He says this year’s winner will progress to Kansas:

“The prize purse this year is $50,000 which is the most lucrative in amateur baseball tournament competitions in North America, and the winner of this year’s tournament will also get a birth into the championship week at the National Baseball Congress World Series in Wichita, Kansas.”

“We were able to tie it in with another event that they’re doing in Victoria on the island, so from a cost perspective we were able to save a tremendous amount of money other than having to pay for them to come directly from Cuba, the quality of baseball that they are going to provide for our fans is going to be fantastic.”

Boutang adds he’s been attending the GFI since 2001 as an umpire. This year’s other competitors are The Seattle Studs, The Burnaby Bulldogs, The Alaskan Goldpanners of Fairbanks, The Northwest Honkers, and The Reno Astros. The Everett Merchants, San Francisco Seals, Houston-Westchase Express, and The San Diego Stars are also competing. Most of the teams attending GFI 37 were invited last year before the event was cancelled. The tournament runs June 25th to July 1st at James Donaldson Park.