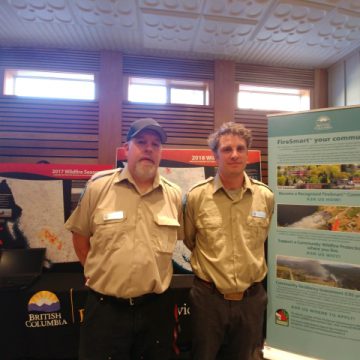 That is the message BC Wildfire service has for BC residents, especially those in rural wooded areas.

“There’s been wildfires in our back yards since we had them, and there will continue to be,” explained Acting Senior Wildfire Officer-Prevention, Fons Raedschelders. “We have to align ourselves with the ecology rather than try and butt heads with it. We can’t out-muscle these natural events. You just try to steer them, prepare and live with them.”

Meanwhile, Raedschelders says BC Wildfire Service is increasing training for personnel and bringing in new technologies every year to find the balance between suppression and management for wildfires. He shares his outlook on the summer ahead, after the two wildfire seasons BC just saw.

“I’d be remiss to say that 2017 and 2018 were special years and were very busy, but they were very different years. The weren’t the same and we approach every season like its going to be a different busy season.”

He says people often think of fire fighting in terms of helicopters and equipment, but it’s people working on the front lines. The more communities and the general public prepare and reduce their risk, the easier their job becomes. Communication, especially between neighbours, makes for a streamlined evacuation process. He also reminds residents that 99% of BC is indeed a fire based ecosystem.

As for the 2019 season, long term warm weather may have an effect on wildfires, but a warm spring doesn’t necessarily spell disaster.

BC Wildfire Service and other provincial organizations and nations are adjusting to the increasing threat of wildfires.

“We have partnership with other provinces. We have partnerships with our neighbors to the south, with Australia that we developed over the years. Because, that’s something you have to do. Some of these large scale events are of the magnitude that there isn’t a force out there that can handle these thing. So leaning on your neighbours and other wildfire agencies, it helps with capacity but it also helps with idea sharing, development of training. We aren’t the only place in the world dealing with this.”

It takes a society, says Raedschelders, not just one agency to deal with wildfires.