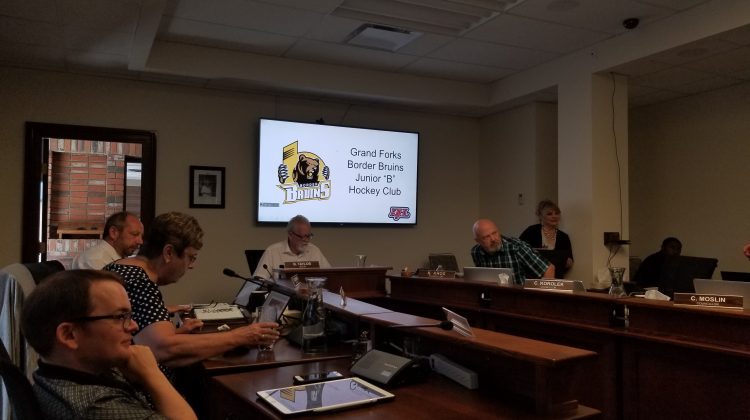 Representatives of the Grand Forks Border Bruins presented to city council on Monday. This will be the 50th anniversary season for the Bruins: established in 1967. Following his recent contract extension Head Coach John Clewlow was present, with Gerry Foster.

Foster says the team helps put money back into the community:

“The players are billeted and they pay $500 per month to the billet families. This works out to about $10,000 or more per month or approximately $60,000 for the hockey season. Much of that money goes back in the community, for groceries of course, they eat a lot….”

He adds that of the past 14 seasons, at least 37 players on the roster have received college scholarships to continue their education or hockey careers.

“For the last four years they’ve made playoffs, and things are improving for us, not only on the ice but we believe off the ice….” Foster tells Grand Forks city council. “Local players of course always have the opportunity for roster spots, and we have a Minor Hockey Association in Grand Forks and we love for some of those players to always be on the Bruins roster -it’s not always possible, because you have to work your way onto the team….”

Foster says at least two or three local players will be a part of the pre-season camp that runs August 30th to September 1st. The first exhibition game hits the Jack Goddard Memorial Arena on September 4th, and the Bruins face the Rebels again for their 2nd exhibition game, September 6th, in Castlegar.