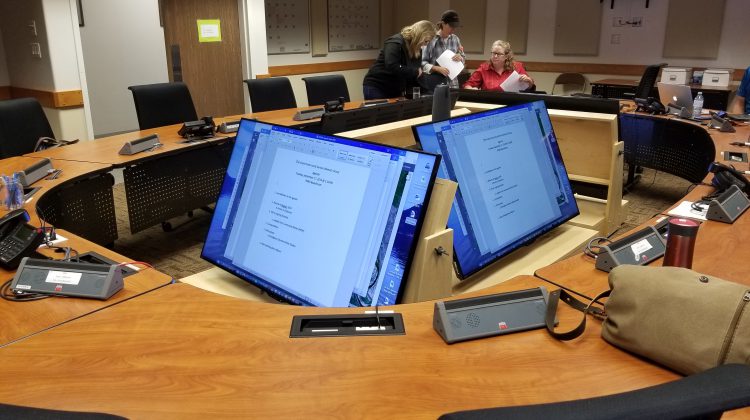 The meeting was held in the RDKB boardroom. (Alex Alan, MyGrandForksNow staff)

It was back to the drawing board at Tuesday’s Social Service Advisory Committee meeting. This following city council’s decision to not follow the Committee’s recommendation to rescind a letter of eviction filed to the old Warming Centre building owner. However, efforts to open a shelter for this Winter continue.

Regarding council’s decision, Chair Everett Baker says the Committee is not there to be a seventh councillor at the table:

Baker says varying opinions on the committee give it strength:

“I think it’s important that every person represents a certain group in our community, and that was the purpose, to bring the citizens to the table…. Which we’ve done now with ‘C4’ being on the table as well as the Downtown Business Association so I think that alone will help….”

Councillor Chris Moslin was present. He expressed interest in zoning and bylaw definitions but states that won’t help the committee this year, questioning council’s appetite to immediately consider a Winter shelter. RCMP Sergeant Daryl Peppler was another body present at the table. He noted the importance of having trained staff at these facilities as opposed to volunteers. Peppler also weighed in on ideal hours of operation, stating there are merits to operating shelters both around the clock, and not.