Selkirk student recovers after near death fall off a cliff 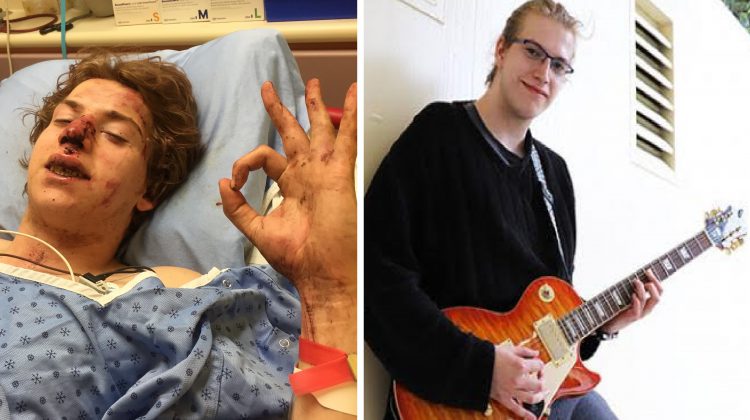 Nick Morgan is back playing guitar after a near death tumble off a Castlegar cliff in 2018.

The 21 year old Selkirk College student said he got lost in the dark leaving a Canada Day party, mistaking distant lights for a direct path home. Morgan said he sprinted right off the edge at full speed.

“I fell and bounced. It was about 30 to 40 metres. I bounced about six or seven times and caused a small rock slide,” said Morgan. “There was a bunch of shale. I broke my ankle and really shattered my arm from my shoulder to my elbow. Completely shattered it. The surgeon described it as hitting a light bulb with a hammer.”

Able to call for help, a passerby luckily found Morgan within 30 minutes of his fall. But it would take search and rescue teams seven hours to perform a safe extrication.

Morgan would have to take a full year off to begin his recovery process. Along with the ten screws in his shoulder holding together a plate and the continued rehabilitation regime, the accident severely impacted his studies.

“I spent a month and a half in a wheelchair immediately after and then spent from July that year to about April of 2019 in a sling. Going to physio every week. Three different surgeries. A lot of visits to the doctor,” Morgan said. “It’s been a really slow road but now, I can’t lift my hand above my head but I can play guitar and that’s all I can really ask for. I’m here. I’m alive. I’m so happy.”

Selkirk College allowed Morgan to take time off to recover and also provided him with financial assistance.

“I found out that they gave me the community of care award and gave me a $1000 bursary,” Morgan added.

Selkirk College announced that  Morgan is back playing guitar, thriving in his second year in the Contemporary Music and Technology Program.

For the full interview with Nick Morgan and Juice FM host Jensen Shields, click on the player below.