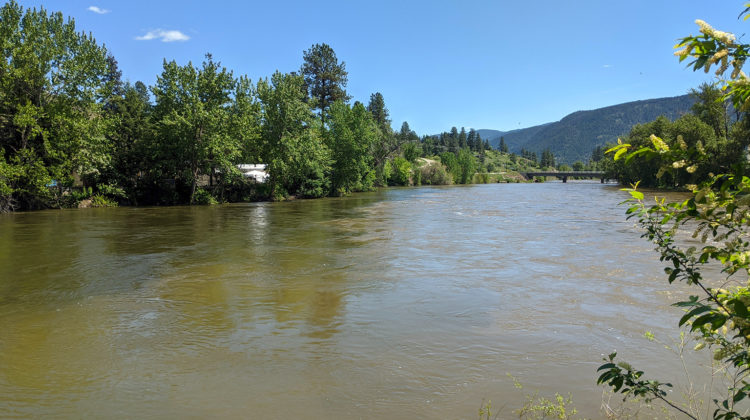 (supplied by the RDKB)

An unusually hot weekend predicted by Environment Canada could to turn to heavy rainfall, increasing the flood risk in the Boundary.

The Regional District of Kootenay Boundary Emergency Operations Centre (EOC) and the City of Grand Forks are working hand in hand to prepare residents for rising waters.

“Due to increasing risk of flooding, the BC River Forecast Centre issued a Flood Watch for the Boundary Region including the Kettle River, West Kettle River, Granby River and tributaries. This means that river levels are rising and will approach or may exceed bank-full. Flooding of areas adjacent to affected rivers may occur.” The EOC said in Thursday’s release.

As of May 28, 2020 the RDKB is asking all residents to register for emergency alerts.

The above link will allow those who register to get live updates by phone, email and/or an mobile app.

“This freshet has really been unrelenting in the sense that the Kettle River has been close to bank-full for over a month now. This means any spike in temperature or precipitation puts low-lying areas immediately at risk of flooding. In the past 24 hours the forecasts have dropped slightly as we receive more accurate information, but we are still watching for a scenario that could approach or exceed what we saw in 2017 where low-lying properties were flooded and we saw access to some roads cut off,” said Mark Stephens, EOC Director.

To prepare for rising river levels, Emergency Management BC, the RDKB and the City of Grand Forks have invested in anti-flooding equipment.

Residents who are looking for a guide on how to prepare for the worst may follow this link. The regional district also provides daily updates here.

Free sandbags and sand are currently available for residents in the following locations:

Residents must bring their own tools and equipment (shovels, transportation) and respect a physical distance of two metres (six feet) between workers as they fill sandbags.