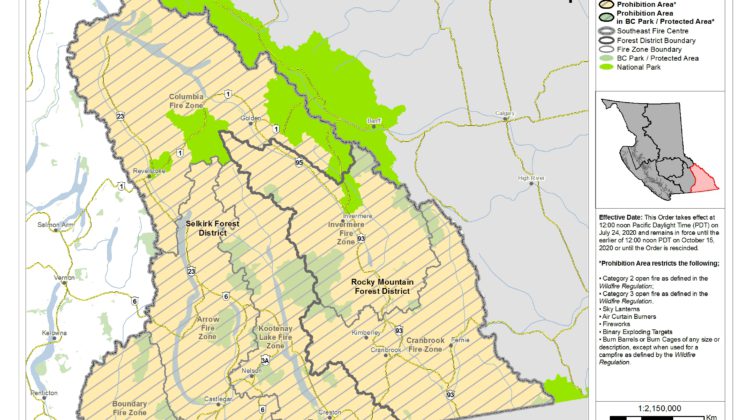 A map of the areas impacted by the fire ban in effect at noon on Friday, July 24, 2020. (Supplied by the BC Wildfire Service)

Category 2 and 3 fires will be banned throughout the Southeast Fire Centre’s jurisdiction starting Friday at noon, but smaller fires, such as campfires, will still be allowed.

Category 2 open burns include any of the following:

The ban does not include campfires less than half a metre in any direction or cooking stoves that use gas, propane or briquettes.

However, the ban applies to all public and private land unless specified otherwise, residents are asked to check with local government authorities for any other restrictions that may be in place.

“This prohibition is being implemented due to increased fire danger ratings caused by a warming trend throughout the Southeast Fire Centre. Anyone who has been conducting Category 2 or 3 open fires anywhere in the Southeast Fire Centre must extinguish any such fire by the July 24, 2020 deadline. This prohibition will remain in place until the public is otherwise notified,” said the BC Wildfire Service.

The BC Wildfire Service added that violating the ban can result in a ticket of up to $1,500, an administrative penalty of up to $100,000 or fined up to $100,000 with up to a year in jail, if convicted in court, with steeper penalties if it leads to a wildfire.

“If the contravention causes or contributes to a wildfire, the person responsible may be ordered to pay all firefighting and associated costs, as well as the value of the resources damaged or destroyed by the wildfire,” explained the BC Wildfire Service.