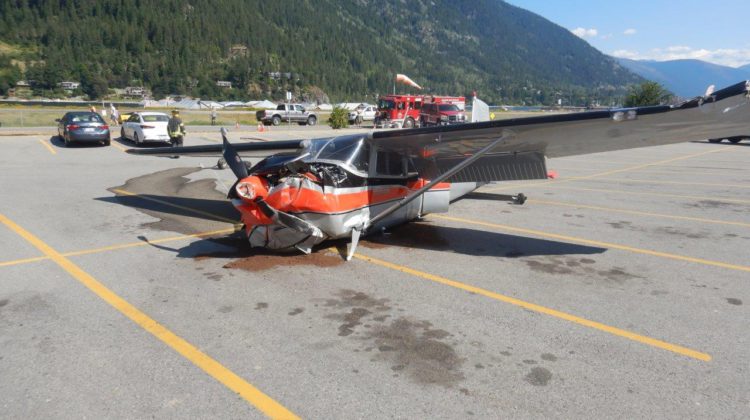 A small plane crashed in the parking lot of the Real Canadian Wholesale Club in Nelson.

The two occupants of the plane sustained minor injuries and were transported to a local hospital.

On Monday, August 3, 2020, at 9:26 am, Nelson Police Department received multiple reports of the unusual incident in the area of the 400 block of Lakeside Drive.

Both NPD and Nelson Fire & Rescue responded, including four firefighters and one engine.

“The first arriving crew’s primary objectives were to protect bystanders, assess the pilot for injuries, and control leaking aviation fuel. In coordination with Nelson Police Department, the scene was secured. Both occupants were able to remove themselves from the plane and were being assessed by EHS,” Nelson Fire & Rescue said in Monday’s release.

Crews noted they were thankful for the hot weather and wind that helped evaporate fuel quickly as they shut off the fuel valves, leaking from the damaged wings. The plane had also only made contact with a single parked car before stopping.

Nelson Police Department and Transport Canada continue to investigate the cause of the crash.

“Preliminary findings suggest the plane was attempting to land at Nelson Airport (CZNL), when a wind gust caused the plane to be drawn away from the runway and coming to rest in the parking lot of 402 Lakeside Drive. A vehicle in the parking lot received minor damage but no one else was injured,” said Sgt. Anstey.

Crews promptly removed the plane from the area and the lot has since been re-opened. The plane was towed by Western Auto Wreckers to Nelson Airport for storage until the investigation is completed, according to Nelson Fire & Rescue.