A building in Castlegar was destroyed by fire Wednesday morning.

Remple says crews were able to stop the flames from reaching any neighbouring homes.

He adds there was an injury to a firefighter while battling the blaze but says it was “minor”.

The building used to be a printing shop but Remple says the business hasn’t been in operation for many years. 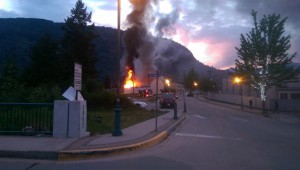 He says the cause of the fire is under investigation.