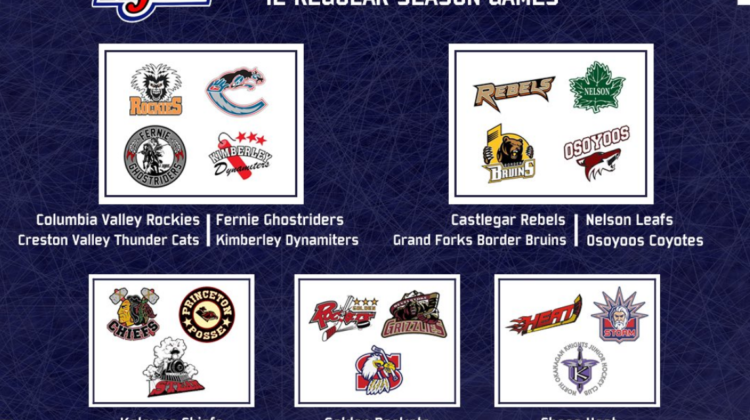 Stage 1 of the KIJHL's four-team and three-team cohort groups to start the 2020/21 season. (Supplied by KIJHL)

Due to COVID-19 guidelines, the KIJHL is abandoning the traditional four-division format this season for multiple stages of “cohort groups” made up for four or three teams.

The changes are being made to fall into place with viaSport’s Phase 3 framework approved by Dr. Bonnie Henry, B.C. Provincial Health Officer.

The cohort groups will change three times during the season, ensuring each team is able to complete the shortened 30-game schedule before the Teck Cup playoffs.

Phase 1 will officially begin with the start of the season on Friday, November 13th and run for six weeks, ending on Saturday, December 19th for the Christmas break. Every team will play 12 games in Phase 1 with the following cohort groups:

Starting on Saturday, January 2nd, the KIJHL will them move into Phase 2. For those in the four-team cohorts Phase 2 will be the final change for the rest of the season, as those teams will play their remaining 18 games, playing each team six times. The three-team cohorts will play eight games through to Saturday, January 23rd, before moving into Phase 3 for another eight-game schedule starting Friday, February 5th.

“Clubs in three-team cohorts will also play two additional games against a regional opponent in order to complete a 30-game regular-season schedule,” said the KIJHL.

The league said the playoff structure for the 2020/21 season will be announced at a later day as the guideline for Phase 3 competition could potentially change again before March 2021.

OK. Are all you #KIJHL fans ready for an info overload?! Make sure you have a coffee in hand or your preferred morning drink of choice in. This is the first of our info graphics on our cohort structure for this season. pic.twitter.com/NvkljS3p7c

Smoke Eaters to welcome back fans

Pfizer and Moderna given approval from Health Canada, new names for both