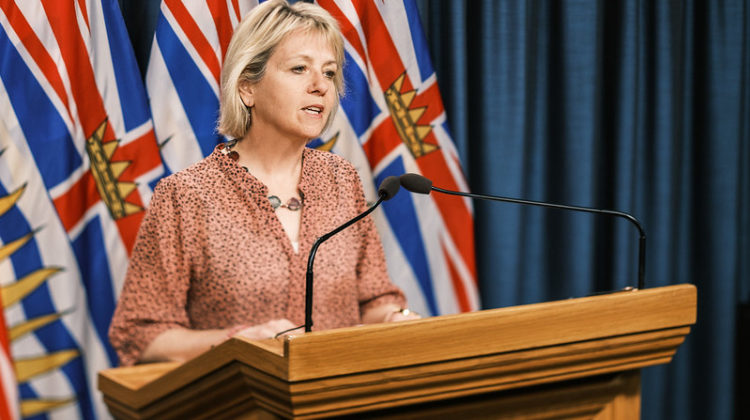 Health authorities across B.C. are reporting 429 new COVID-19 cases across the province following Labour Day weekend, while tighter restrictions on night clubs, banquet halls and liquor sales have been enacted.

The weekend’s new infections have brought the number of active cases in the province to 1,386.

According to the BCCDC, the Kootenay Boundary region has reported two new cases between August 21st and September 3rd, totalling 17 since the start of the pandemic. So far, a total of 460 cases have been reported in the Interior Health region.

To date, 4,978 people have fully recovered from the virus.

Dr. Bonnie Henry, Provincial Health Officer said two new deaths have been attributed to COVID-19 since Friday. The virus has been the cause of 213 deaths province-wide.

In addition to updated numbers, Dr. Henry announced an amendment to several policies.

“Effective today, all nightclubs and all stand-alone banquet halls are ordered closed until further notice. In addition, liquor sales in all bars, pubs and restaurants must cease at 10 p.m., and these venues must close at 11 p.m., unless there is meal service, in which case, meals may continue without the sale of alcohol,” said Henry.

According to Henry, the amendment has been introduced to address the recent rise in daily case numbers.

“These restrictions are meant to take away that late-night temptation that people have, where we know there has been mixing going on, and where transmission is happening in these venues,” said Henry.

As well, limitations on background sound have been introduced to restaurants and other venues.

“We’re putting in provisions to make it easier for people to avoid having to speak loudly, shout or have close contact. That means music and background sounds, such as noise from televisions in bars, lounges, pubs and restaurants must be no louder than the volume of normal conversation,” said Henry.

Henry said that such restrictions are not typically the first response.

“Issuing orders is not something that we do lightly, it is our last resort. We have spent quite a lot of time working with industry within the banquet halls and in the nightclubs to try and put in measures that will protect people from this virus,” explained Henry.  “We have managed to do that through the summer, but as our cases are climbing, as we are starting to move into the respiratory season, we need to make some changes to reduce the risks in these environments.”