Your Juice FM Wake Up Call with Uncle Gus!

Your Juice FM Wake Up Call with Uncle Gus! 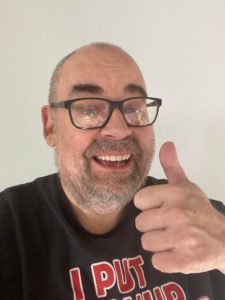 The man they call Uncle Gus has been called many things…

Insightful, Intriguing… not among them… Opinionated, Humourous, and Engaging however fit, plus many other multi-syllable words he has no idea the meaning or the spelling!

Gus was born to a small circus family in southeast Saskatchewan, was purposely forgotten at a local parade, and was eventually raised by Shriner’s.

With over 30 years of experience, Uncle Gus is an award winning broadcaster. He is also a former pro wrestler, working for the legendary Stampede Wrestling out of Calgary (aka… Squiggy Magoo and the Peroghy Prince). Gus was also a former Monster Truck announcer and stand up comedian.

Call him what you want, the goofy Uncle Gus guarantees a good time.

Get your daily serving of fresh Juice weekdays 6 – 10 am!

Brought to you by: