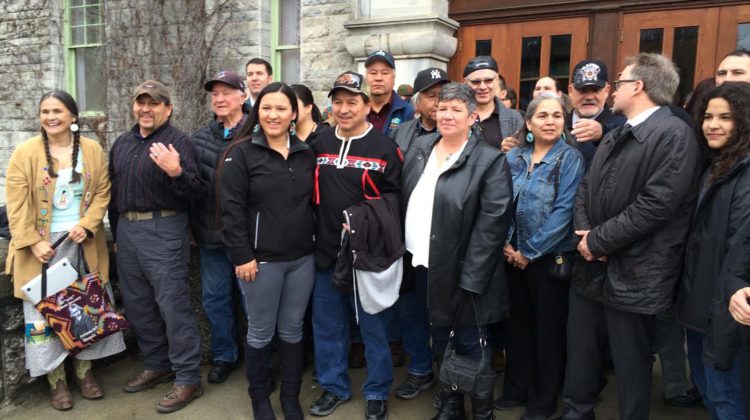 Rick Desautel (centre) celebrates with friends and family outside the Nelson courthouse after a judge ruled the Sinixt have a right to hunt in BC. (Greg Nesteroff photo, 2017)

In a landmark Supreme Court of Canada case, a majority agreed that moving to live in the American part of their ancestral territory did not prevent the Lakes Tribe from being a successor group to the Sinixt.

As such, they found that the Lakes Tribe could be considered part of the “Aboriginal peoples of Canada” under section 35 of the Canadian Constitution.

The decision runs contrary to what the federal government declared in 1956, that the last living member of the Arrows Lakes Band died resulting in the Sinixt extinction leaving them without the rights of a First Nation in Canada.

In October 2010 Richard Desaute, a citizen and resident of the United States of America, shot a cow‑elk in B.C. He was charged with hunting without a licence and hunting big game while not being a resident of the province.

Desaute then defended the charges on the basis that he had an Aboriginal right to hunt protected by the Constitution Act, 1982 , as he is a member of the Lakes Tribe of the Colville Confederated Tribes.  Based in the State of Washington, the Lakes Tribe is a successor group of the Sinixt people, and Desaute shot the elk within the ancestral territory of the Sinixt in B.C.

“The Canadian government took a hard run at this (Sinixt) member through four levels of the judiciary and lost each time. It’s a big win up for the little-known aboriginal group.”, said Rob Louie, President of the Band Members Alliance and Advocacy Association of Canada (BCAAAC).

Louie, who is a member of the neighbouring Ktunaxa Nation, said he welcomed the ruling.

“This case happened in our backyard,” Louie added. “However, this case addressed a right to hunt of an aboriginal group, not whether Ktunaxa title exists in the area hunted.”

The Supreme Court noted that when it comes to Aboriginal claims, the trial judge is typically best suited to assess the evidence as it is presented.

The international border was drawn in 1846, and by 1872, a number of members of the Sinixt were living for the most part in Washington State but continued to travel to British Columbia for hunting purposes.