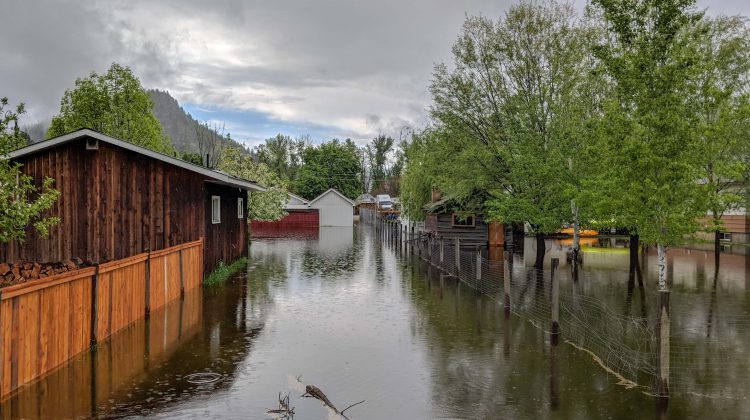 An alley in North Ruckle during the flooding of 2018. (Photo provided by City of Grand Forks)

The City of Grand Forks and Osoyoos Indian Band have reached a deal on a joint venture that will see up to 10 city-owned homes relocated from the flood-ravaged North Ruckle neighbourhood to other parts of the community.

The band will move the homes, place them on new foundations, and fix them up. They will then be offered for sale to the public, with the city and the band splitting the profits.

Additionally, the band will build another 10 modular homes. The city’s net revenue from the partnership would be returned to its flood mitigation program.

The homes in question were among the dozens damaged in the flood of 2018 that the city has since acquired under the program. While some were damaged beyond repair and will be demolished and others are not moveable, a number are still in reasonable condition and good candidates for rehabilitation, Mayor Brian Taylor said.

“We have been trying to move those houses and do something with them and avoid as much as possible anything going to the landfill,” Taylor said. “This is an opportunity to save the environment and provide some desperately needed housing in Grand Forks.

“Saving some of these homes from the flood plain area is a silver lining, and we are very grateful to the Osoyoos Indian Band for making this opportunity a reality. We really value the relationship the city is developing with band and look forward to continuing it.”

Taylor said three areas have been identified as potential locations for the homes to be moved to, but added that more work needs to be done before they can be publicly identified.

Taylor explained that their relationship with the band began as a result of disaster mitigation funding that the city received. “There are a number of situations where we needed sign-off from First Nations. They’ve been fully aware of the opportunity and have pursued it.”

“The Osoyoos Indian Band has developed a good business relationship with the City of Grand Forks,” Chief Clarence Louie said in a news release. “We look forward to developing this housing project.”

Under the flood mitigation program, the city is building dikes, flood walks, and rip rap and restoring the North Ruckle floodplain. The federal and provincial governments have provided more than $50 million for the work while the City of Grand Forks is chipping in $3.5 million. The work should finish in 2023.