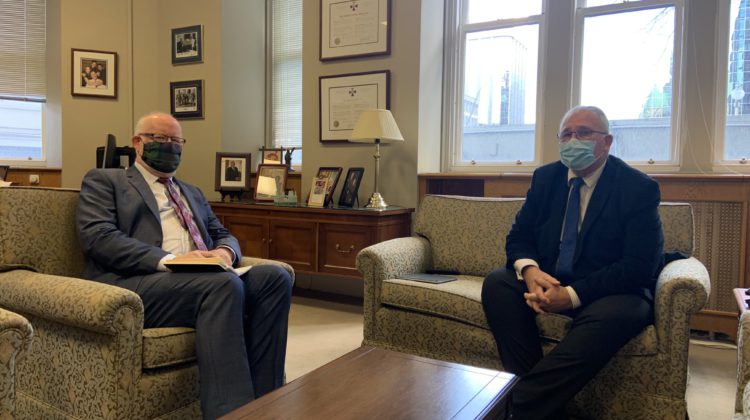 Cannings, who is the NDP critic for emergency preparedness and climate change resilience, met with Blair simply to get to know him as the new parliament begins. But their conversation was dominated by the recent heavy rain and slides in BC that has caused flooding, damaged highways, and disrupted supply chains.

“Clearly the infrastructure we have now isn’t up to the weather we’re getting with climate change,” Cannings says. “We’re living climate change right now. The Coquihalla [highway] was only built in the mid-1980s, so it’s not old as highways go. But it clearly failed in multiple places in this one day rain event. So we have to look toward the year 2100 and say what is the weather going to be like in that period?”

Cannings says building the sorts of dykes, culverts, and bridges needed to withstand extreme weather will require a long planning horizon. “It’s something politicians sometimes have trouble doing, planning for a future beyond a four or five year election cycle,” he says.

Cannings says he also pressed for more money to be added to the government’s disaster mitigation and adaptation fund. That’s the program that Grand Forks was able to tap following the city’s devastating 2018 floods. Canning says the fund needs to be topped up and a separate pot created for adaptation projects by communities planning projects to avoid the effects of disaster.

Cannings said he thanked Blair for the deployment of the armed forces to the Fraser Valley to help with flood response and also discussed a new alert system that Environment Canada has been developing for atmospheric rivers, similar to hurricane warnings.