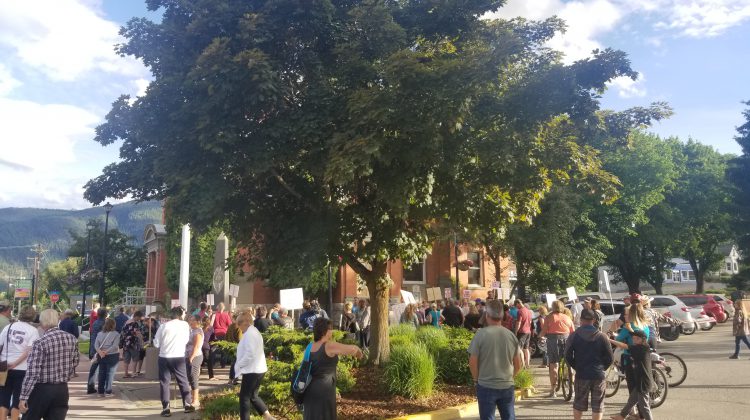 About 100 people were seen protesting outside of City Hall. (Alex Alan, MyGrandForksNow.com staff)

BC Housing’s 34-unit Supportive Housing Project will not be landing on 70th Avenue. This as Grand Forks city council unanimously voted against rezoning the city-owned lots yesterday (June 10th), keeping the project set for 2nd Street. About 100 people were seen protesting the project outside of City Hall, plus a handful made it inside, and at one point an RCMP officer was seen outside of council chambers as well.

Councillor Christine Thompson was present via telephone, and says they heard the community loud and clear:

“The Public Hearing was very loud and clear against the project….”

“This flawed idea was an attempt to engage BC Housing in a meaningful conversation, we were kind of surprised when they said ‘yes, we’ll consider it’ but we did not want to drop the chance to talk to them at a table in a meaningful way.”

He adds that although he supports Maple Ridge’s attempt to legally challenge BC Housing, he doesn’t support burdening tax payers.

Councillor Cathy Korolek says public relations should come from the powers that be, and not local government, adding elected officials shouldn’t have to put a positive twist on projects with far-reaching effects:

“Projects that are called supportive housing, low barrier, whatever you want to call them, require the support systems in place. Right now we have an RCMP attachment that is doing the best they can with limited staffing, we already wait a maximum 3 weeks to see the doctors….”

A motion from council endorsed at the Association of Kootenay and Boundary Local Governments convention is also being forwarded to the Union of BC Municipalities convention, suggesting BC Housing should seek local government’s approval before purchasing land. Also Monday evening, council voted to allow some temporary office trailers to be placed on the 70th Avenue lots near the 19th Street development site.